We are now going to start on our first real sensor - the light sensor!

The light sensor we are using is called a Light Dependent Resistor (LDR). Its resistance changes based on the brightness of light shining on it. The brighter the light the lower the resistance.

Using the Arduino's analog input pins we can get a measure of the light levels in our program, and use it to change the way our LEDs flash. 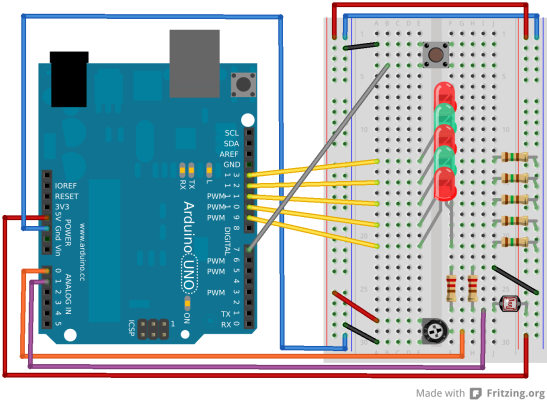 By following this sound tutorial you'll create a light controlled noise machine (the tutorial refers to a 4.7k resistor, use two 10K resistors in parallel as you did above).

Tip: If your breadboard is getting a bit crowded then remove a few of the LEDs for the time being.

Congratulations. Now you can go onto the next stage. Stage 4!.