One LED was fun, but how about five? Replicate the LED/resistor circuits on your breadboard 4 times, using a different pin on the Arduino for each LED. 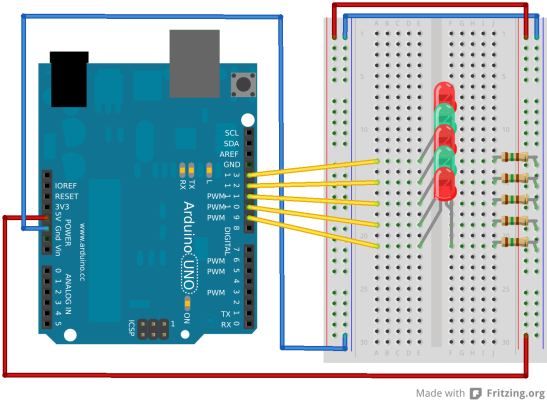 Note: the buttons in your kit have bent legs. It's worth using a pair of pliers to straighten them out. 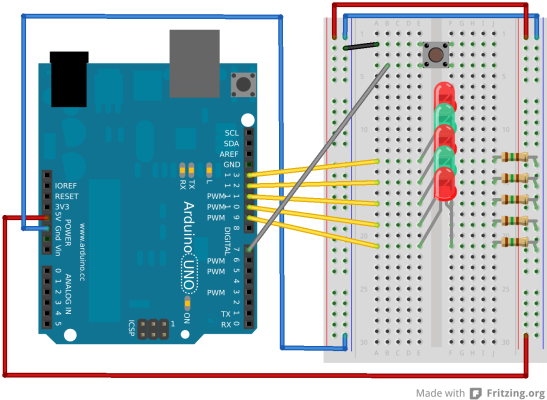 Below is the code for controlling LEDs with the push button. It stops the LEDs when the button is pressed.

We are now going to try to use the rotation sensor, otherwise known as a potentiometer or variable resistor, to control the speed of the LEDs. First, have a look at this video which explains the theory of voltage dividers.

Our rotation sensor is simple a voltage divider circuit in which the resistance of the two resistors change when you turn the knob. This means the voltage between the two resistors changes when you turn the knob. We are going to use the Arduino's analog inputs to measure this voltage accurately, then use the measurement to control the length of the delay we have in our loop, and hence the speed of the LED flashing sequence.

The Arduino's analog inputs are on the left side of the board and are labelled A0 through to A5. You can read the voltage on pin A0 as follows:

Place the rotation sensor on the breadboard and wire it up to the Arduino as follows: 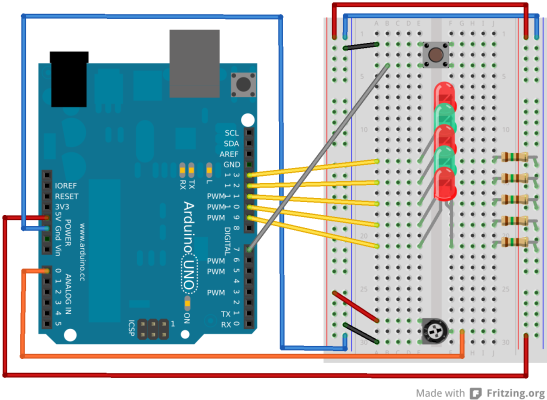 Remember using the serial communication in Lesson 1 to allow the Arduino to send data back to your laptop? We can use that to see how the value output by our rotation sensor varies as we rotate it.

Congratulations. Now you can go onto Stage 3!