After taking the Arduino out of the box the first thing to do is to connect it to the breadboard using wires.

First, we need to wire up the breadboard's power rails that go up each side. The power rails are designed to give easy access to 0V (also known as GND) and 5V.

Once you've done this the breadboard and Arduino should look like this. 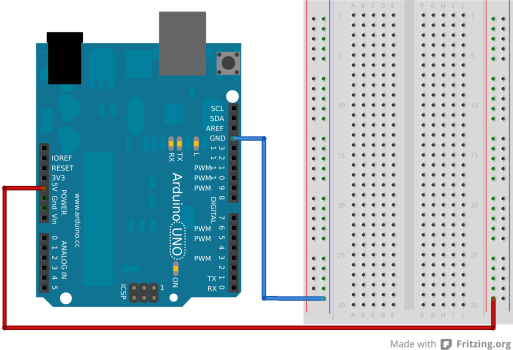 Let there be light

Now we will power an LED 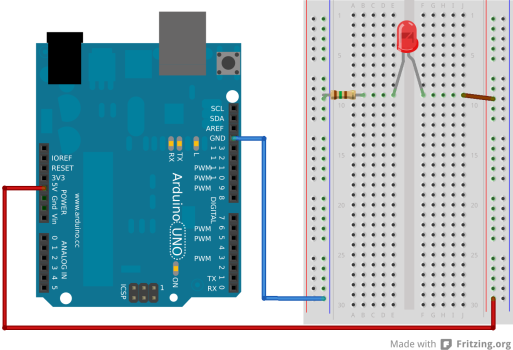 (Tip: If you want to zoom in on any of these diagrams, just click on them!)

Remember: With resistors it doesn't matter which way round you put then, but with LEDs it does. See this page for more information.

Having an LED lit is cool, but the Arduino is so much more than just a power source! Let's control the LEDs, first by blinking it on and off once per second.

You should now have a circuit that looks like this: 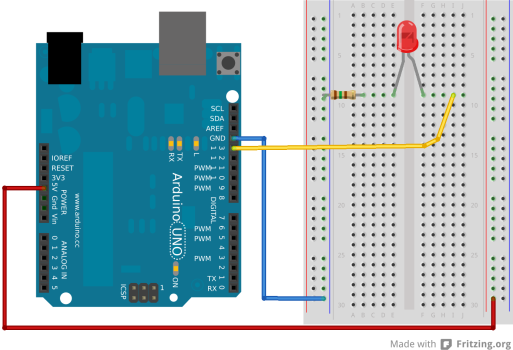 If you have a brand new Arduino that hasn't been used before the LED should start to blink. This is because it comes from the factory with this test program already installed.

We now write our first program to make it blink. Here's the program code:

Copy this code into your Arduino software and upload it. 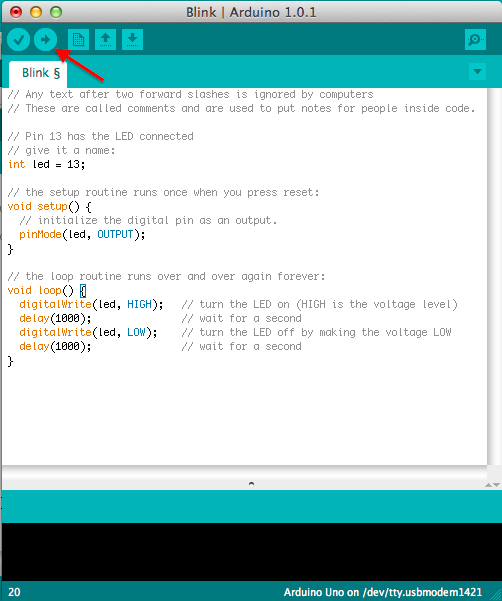 If all goes well, you should see your LED start to blink! If not, ask for help :)

Here's your first challenge! Try to complete both tasks. This will help you understand the code.

You might already be thinking. How do I know what my program is doing if all the feedback I have is a blinking LED? Well there is a solution in the form of serial communication which allows your Arduino to send messages to a computer. These messages can then be shown on your screen by clicking the button at the top right of the Arduino software.

Once you've uploaded the program, open the Serial monitor: 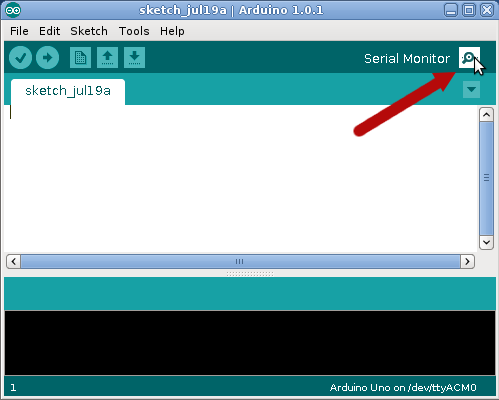 You should see the Arduino say “Hello World!” followed by LED On and LED Off once a second. If you are having problems, check that the speed in the Serial Monitor is set to 9600. Otherwise, ask a helper!

So that's the end of the 1st lesson.

Once the rest of the group has got to this point there will be another short presentation on programming concepts before moving onto Tutorial 2.